Changing the Mindset of a Pharma IT Unit 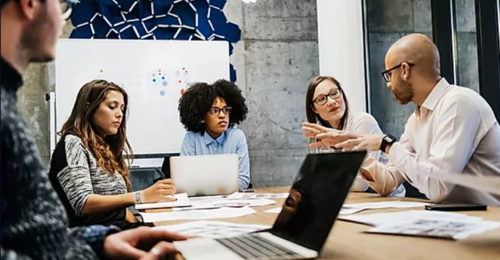 Leadership teams frequently aspire to change the ‘mindset’ of their units. They link the degree of productivity, customer responsiveness, urgency to achieve – with (quite rightly) an enthusiastic self-starting, engaged attitude in the staff.

Desiring it to be so is, however, much easier than actually achieving it!

Such was demonstrated at a large Pharma IT Group’s awayday. For most of it there had been a huge buzz. Early on staff mounted ‘stalls’ in a fair, showcasing various internal client projects and possible future technologies to their colleagues. Another innovative activity was a huge group photo taken by drone from far above (when drones were a lot rarer than now). There was a highly enjoyable meal and drinks and then everybody gathered in a hall for some presentations from the podium.

A couple of leadership team members made presentations about the future of the Group, and in particular told everyone that the ‘mindset’ needed to change – especially in the direction of a sense of urgency and responsiveness.

This may have been thought insightful by the leaders, but it was a mistake and did not have any galvanising effect on the audience. So, although the event as a whole had some great aspects, it was a lost opportunity.

What can we learn from this?

‘Mindset’ is a commonly used term these days, and rightly so. If peoples’ mindset is not in harmony with your goals, or if they are harbouring feelings of resentment, feel they are unfairly treated – or whatever, this will certainly affect their performance and how much you can develop them. But there are some things to be very careful about. Firstly, remember that everyone’s feelings are different. Some will be right with you, some will be less enthusiastic, so a ‘broad-brush’ message to everyone is not helpful. Secondly, and critically, others’ minds are not visible to you and you can’t alter them directly! You don’t have an external ‘mindset dial’ that you can turn. Remember this one thing: never try to change anyone’s attitude by telling them they need to change their attitude!

(Note – It is no surprise for example that the phrase ‘I don’t like your attitude’ is typically heard in conflict -based TV dramas!)

A much more useful thing to have done, would be to focus the event on exploration of new ideas and from the podium, an explanation of the business demands of the future rather than how people should think and feel.

However, the mindsets of people remain critical and it’s still an important management task. But a focus on the culture of the organisation and management of behaviours will more likely effect change.